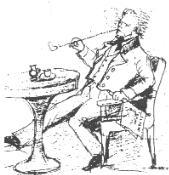 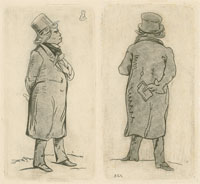 In the winter of 1819/1820, the Viennese sculptor and medal maker Joseph Daniel Böhm was one of Ludwig van Beethoven's acquaintances and the composer mentioned him in his conversation books. During that time, probably two small depictions had been created showing Beethoven walking on the street. They are very lively and comply with the description of Beethoven, which Gerhard von Breuning published in 1874 in his book about Beethoven.

The book says: "The bowler hat, which was very common at that time and which he hanged on the very top of the coatrack when he came home even if the hat was wet from the rain and still dripping, since he tilted it out just lightly [...], as a result had lost a section in its lid and therefore was arched and wide-stretched to the top. [...] He usually wore the hat in a manner that showed his front and did not hide his face. As Rellstab says right to the point, "his grey hair, which were neither frizzy nor rigid, but a mixture of both, were flying out at both sides of the hat [...] The coattails however, had been rather heavily loaded, because there was not only a handkerchief which was often hanging out of the coattail, but also a folded fourth notebook for his compositions, which was not thin at all, as well as an octavos conversation book with a thick pencil like those which carpenters often use. He used this conversation book like a calendar and notebook for meetings with acquaintances and friends."(S.B.)

In 1923 the Berlin auction house Henrici auctioned off this pencil drawing, which Theodor Frimmel considered an original drawing by Vienna artist Joseph Daniel Böhm (1794-1865). Around the 1820s, Böhm had drawn Ludwig van Beethoven on one of his walks and then engraved the drawing on a small silver plate.

This drawing is, however, not the original one but a copy made by an unknown artist. The quite cautious style of the drawing and its overall rather bashful and poorly spontaneous appearance support this assumption. The fact that some details of Böhm's silver plate engraving are missing on the drawing is another piece of evidence.(S.B.)

Joseph Daniel Böhm, who created this relief, had lived in Vienna since 1813. During the first half of the 19th century, he was a very acknowledged medal-maker and gem-cutter, and in 1836 he was appointed director of the Vienna Engraver's Academy.

During the years around 1820, Böhm worked repeatedly on the illustration of Ludwig van Beethoven. He drew the composer while the latter was going for a walk and Böhm created the medallion with Beethoven´s portrait, which is shown here. A medal was to be made after this medallion. It was during that time, that the artist got to know the composer in person. Beethoven mentioned him a few times in his conversation books, and we can consider it true that Beethoven sat for him at least once.

The original medallion which Böhm created after his studies had been in the possession of the Viennese Beethoven researcher Theodor Frimmel until the end of the 19th century. It has gone lost, but a casting was made for the Beethoven-Haus that has been preserved until today.(S.B.) 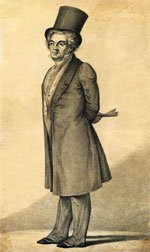 Prague painter and lithograph Martin Tejek who lived in Vienna from 1821 onwards, created a Beethoven depiction quite popular throughout the 19th century. The composer is shown on a walk, wearing elegant clothing. Beethoven is depicted as a whole figure, turned slightly to the left. He wears a top hat just like Stephan von Breuning described in his memories "Aus dem Schwarzspanierhause" (1847) and has his arms on his back, a piece of paper, probably a piece of sheet music, in his hand.

The composer´s contemplative appearance meets the description painter August von Kloeber noted down after meeting Beethoven in Mödling near Vienna. Von Kloeber met Beethoven several times on his walks and said the composer would often pause on a walk, a piece of sheet music and a pencil stub in his hand, listening and looking up and down and would then write notes on the paper.

(about 1823) Engraving after a drawing by Martin Tejcek Contrary to general belief, Beethoven attached great importance to his wardrobe. Thus Schindler reports that his shirts and collars were always immaculately white and that his wardrobe was comprised of a selection of wellcared-for suits. (Bodmer, Zürich) 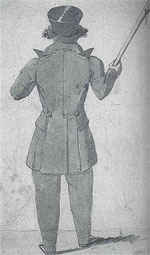 In 1916 this watercoloured pencil drawing was auctioned off at the Berlin auctioning house Henrici. The picture was drawn by Joseph Weidner (1801-1870), an artist from Vienna, who was a renowned portrait and genre painter in the early 19th century. Among other works, Weidner drew a portrait of Ludwig van Beethoven for which Beethoven acted as a model for the painter.

The painter probably observed Beethoven several times when this picture was drawn. It is possible that he made the drawing on a walk and later coloured it in his studio. Although the sheet does not bear any inscription or label, many details suggest that the person depicted is indeed Beethoven, such as the person's figure or the way in which he wears his hat and how the hair can be seen under the hat's brim. These details are perfectly in accordance with descriptions of Beethoven's looks in the 1820s, given by various friends and contemporaries of the composer.(S.B.)

(1825) Crayon with water color by Joseph Weidner Beethoven is shown here from the back and gesticulating with a cane held in his right hand. (Bodmer, Zürich) 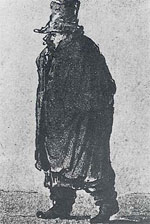 The article in the daily paper "Stuttgarter Morgenblatt" on 11/5/1823 written by Johann Sporschil tells us, that Beethoven used to go out for a walk no matter what the weather was like. Sporschil, who apparentely was very well informed about Beethoven's habits, wrote: "He loves nature. It is not easy for him to sit inside the whole day, when the weather in the winter is terrible, but when he is in the countryside during the summer, he usually went out to the blossoming garden of God, even before sunrise".

Various fine artists of the 19th century had recorded this habit of the composer. A water color pen drawing by Johann Nepomuk Höchle shows "Beethoven in terrible weather", wrapped in a long, thick coat, with the collar pointed up. The bavaroy which was strikingly long, the heavily twisted top hat, and the wide pants which apparently were pushed up the legs, completely comply with the descriptions of contemporaries about Beethoven's way of dressing when going for a walk.

Considering the whole appearance of the little drawing, it must have created between 1820 and 1825. The original is lost today, but some reproductions - like the one that is shown here - which have been created in the late 19th and the early 20th century do still exist.(S.B.)

Pen and water color by J. N. Hoechle Beethoven is seen here during bad weather wrapped in a raincoat and covering the right side of his face.