This three-part canon on "Kurz is der Schmerz und ewig ist die Freude" was written by Beethoven on 23 November 1813 for Johann Friedrich Naue (1787-1858). The text ("Brief is the pain and forever is the joy") is from The Maid of Orleans by Friedrich von Schiller, who of course is best known in connection with Beethoven as the poet of the Ode to Joy that concludes the Ninth Symphony.

Naue spent most of his life in Halle, in Saxony, but was apparently in Vienna in the fall of 1813, when Beethoven wrote this canon in Naue's visitation book. Beethoven also wrote, "For Herr Naue, with Thanks. By LvBthwn. Vienna on 23rd November 1813." Naue was not, as his Wikipedia page suggests, a student of Beethoven, which was a very small and select group. Naue did go on to have a long and distinguished career as a composer, theorist and educator, although he is virtually forgotten today.

Those of you who glance superficially at the score may notice that quite frequently some staffs have 1 flat, while others have 4 flats... simultaneously ! Two key signatures at the same time ?! But isn't that bitonality? 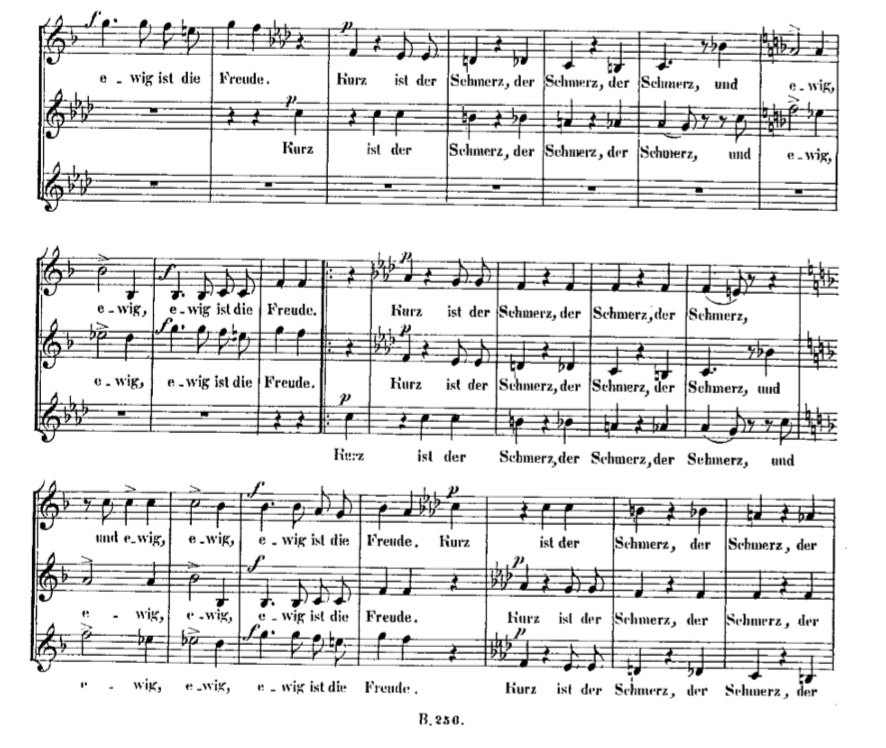 Now, before you run off to write sensational articles proclaiming Beethoven's revolutionary genius, because he had invented bitonality 100 years before anyone else (oh dear, oh dear, a little learning is a dangerous thing indeed), a word of caution.

A closer look at the score makes clear that the first part ('Kurz ist der Schmerz') is a chromatic descending line in F minor, hence the 4 flats, which is then followed by 'ewig ist die Freude' in F major (1 flat). Essential to the writing of a good canon is that the composer checks how the later parts of the melodic line combine with the earlier parts. And of course Beethoven makes sure that the resulting harmonies sound convincingly (no matter the differing key signatures), in that they all remain well within the scope of classical harmony. The chromaticism of the F minor section does indeed create a good deal of tonal instability, but there are no two different tonalities occuring at the same time.

So, if you believe that this constitutes a case of bitonality, then I must stress that you suffer from a delusion: the musical equivalent of a sighting of the Loch Ness monster. Sorry, guys!

That in spite of the chromaticisms Beethoven manages to get the contrast between F minor and F major across is a sign of real mastery (I can give you an example from Brahms' First Symphony to show that this is not as easy as you may think); Beethoven understands not merely the syntactical significance of each flat and natural he writes, but, more importantly, also their emotional implications. That he dedicated this small, yet sophisticated composition to Naue shows that he had sincere respect for Naue's musical abilities.

Beethoven would write another, similar canon on the same text, using the same meta-ideas (descending chromatics, contrast between minor and major) yet clearly distinct, as a gift to Louis Spohr in March 1815, which is cataloged as WoO 166.

The text is taken from Schiller’s Jungfrau von Orleans (‘The Maid of Orleans’). The work was written for Beethoven’s pupil, Johann Friedrich Naue. The same text was used in 1815 in canon WoO 166 for Spohr.