This is certainly the strangest of Beethoven's arrangements for piano, since it also calls for two cannon to be fired throughout the first (Battle) portion of the piece. The piece was wildly popular in its time as anti-Napoleonic feeling increased in Europe. This "symphony" (as Beethoven referred to it in letters) is easily the most clearly descriptive piece Beethoven ever wrote. The transcription ends, as does the orchestral version, with a fugato treatment of "God Save the King." Published 1816 by Steiner in Vienna. 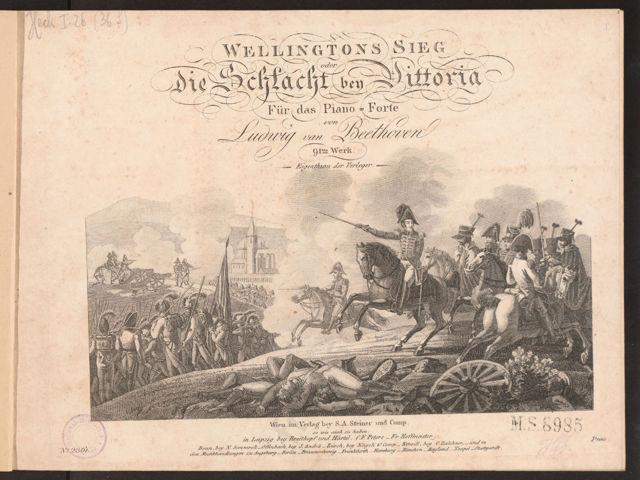 The piece commemorates the 1813 Battle of Vittoria during the Peninsular War. The British forces under the Duke of Wellington soundly defeated Joseph Bonaparte, King of Spain and brother of Napoleon, supported by several French armies. The British forces, having forced Joseph into the northeast part of Spain, won decisively with the aid of Portuguese soldiers. The French forces not only suffered significant casualties, but in the rout they abandoned nearly all of their artillery. Wellington was enraged when the British soldiers, instead of pursuing the fleeing French, stopped to loot their wagons, and he referred to one cavalry regiment as "a disgrace to the name of soldier." Nevertheless, the battle was seen as a clear triumph in Beethoven's Austria, which promptly declared war on France. When combined with Napoleon's failed Russian campaign, it was now clear that the Emperor of France was vulnerable, and led inexorably to Napoleon's downfall.