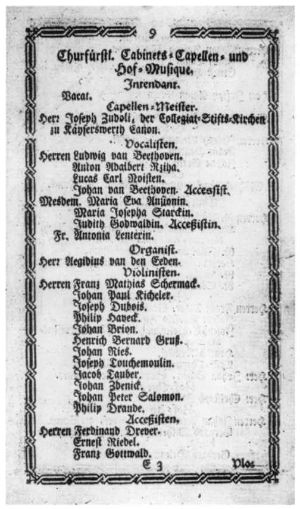 PAGE 9 OF THE "KURKÖLNISCHER HOFKALENDER" OF 1760 On this page the members of the "Kurfürst's Chamber Orchestra and Court Music" are listed. Among the singers are Ludwig van Beethoven, the grandfather, and his son Johann. ( Municipal Archive, Bonn) 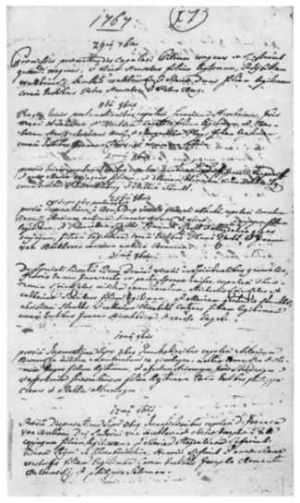 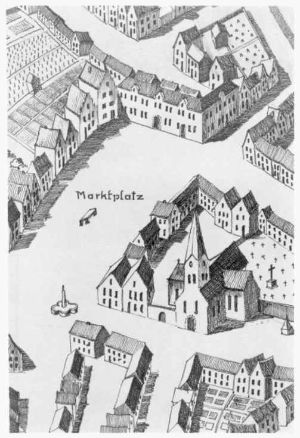 BONN. ST. REMIGIUS, IN THE FOREGROUND, WITH THE CEMETERY Drawing by W. Schirmer after the engraving by Merian In this church, which burned in 1801, Ludwig van Beethoven, the grandfather, was married to Maria Josepha Poll in 1733; their son Johann here married Maria Magdalena Keverich in 1767. Their son, the famous Ludwig van Beethoven, was christened here on December 17, 1770. ( Municipal Archive, Bonn)
-35- 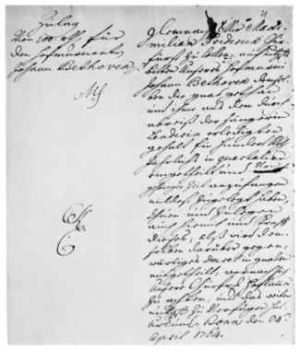 "PAYMENT OF 100 REICHSTHALER TO THE COURT MUSlCIAN JOHANN BEETHOVEN" (April 24, 1764) At the request of his father Ludwig, Johann (who "has already sung the soprano, counter-alto, and tenor voices for 13 years without salary, whenever the necessity occurred, and is also capable of playing the violin") was awarded a modest remuneration, which enabled him to marry three years later. ( State Archive, Düsseldorf) 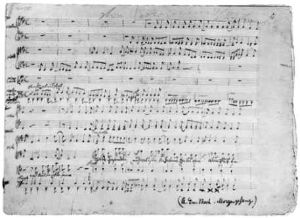 PHILIPP EMANUEL BACH'S "MORGENGESANG" COPIED BY JOHANN VAN BEETHOVEN This eleven page manuscript is the only known music-autograph by Ludwig van Beethoven's father. Ludwig later made a pencil note at the head of the manuscript "Written by my dear father." The valuable document was donated to the Beethovenhaus in Bonn by Johannes Brahms in 1893. ( Beethovenhaus, Bonn) 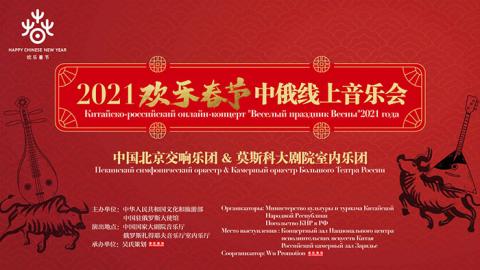