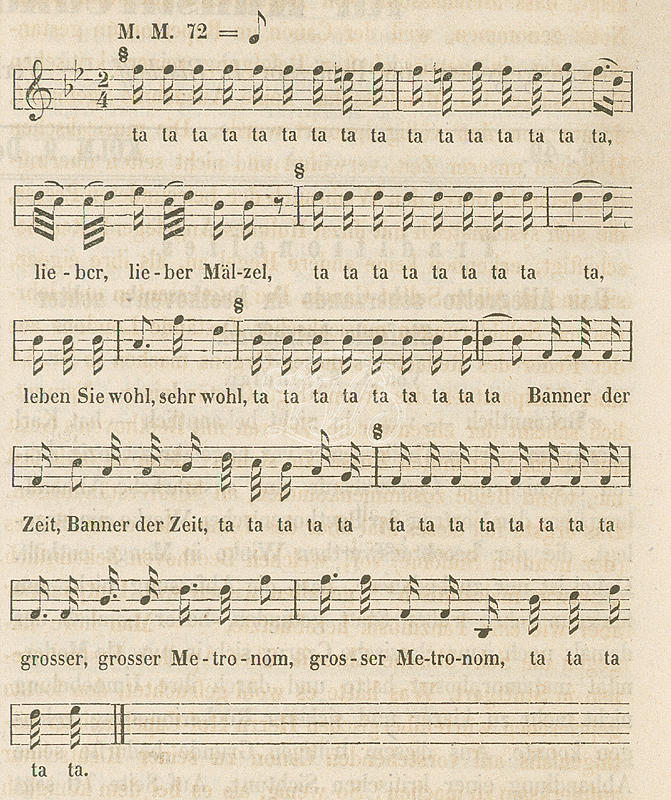 For a long time it was believed that Beethoven wrote the famous "Mälzelkanon" which features the theme of the second movement of his Eight Symphony, for his friend, inventor Johann Nepomuk Mälzel in 1812, to honour him for the invention of the metronome. Today, this assumption has been proven wrong: The canon was not even written by Beethoven. WoO 162 is just another figment of the imagination of Anton Schindler who later attributed the piece to Beethoven.

In the composer's last months, Schindler worked as an unpaid secretary and nurse. In his opinion, his contact to Beethoven made him the only authority for questions about the composer's biography after Beethoven's death. Regarding the musical interpretation of compositions and Beethoven's bequest, he named himself solicitor. One of Schindler's central topics was which tempo should be followed when performing a composition as a wrong speed could corrupt the piece's original character - whatever Schindler understood by original character. Beethoven's own tempo directions which sometimes were impossible to follow or not in line with Schindler's speed suggestions led too much confusion. Schindler particularly complained about the tempo which his contemporaries, especially Felix Mendelssohn, applied and which he considered far too fast. To support his idea of a slow tempo he published the so-called "Mälzelkanon" in Hirschbach's musical magazine "Musikalisches Repertorium" in February 1844. The canon's theme is taken from the second movement of Beethoven's Eight Symphony. The text clearly refers to Mälzel's metronome. There is no manuscript of the composition but Schindler quickly provided information on how and why the piece was composed (his reports in different publications vary, leading to confusion among his contemporaries). To corroborate the canon's authenticity, Schindler added entries in Beethoven's conversation booklets to prove his reports. For the music research of these days, the "Mälzelkanon" is definitely considered an invention by Anton Schindler and does not belong to Beethoven's work. (J.R.)