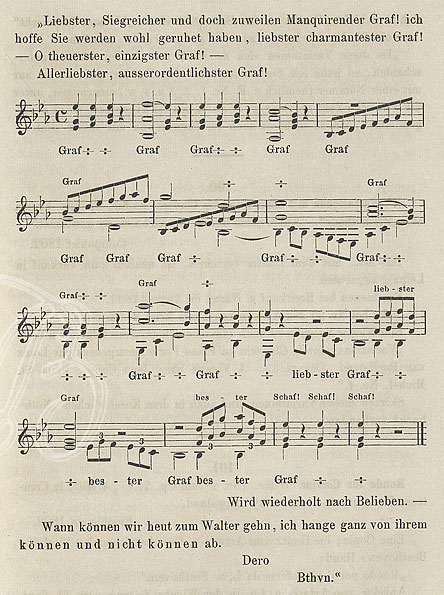 Nikolaus Zmeskall von Domanovecz worked as a civil servant at the Hungarian Court Chancellery in Vienna. He had an interest in music and played the cello. As early as in the 1790s did he meet Ludwig van Beethoven and became one of the first friends of the composer in Vienna. There are many letters and notes from Beethoven to Zmeskall of which the last one was written just a month before the composer died.

Zmeskall was a passionate music lover and excellent cellist. On Sundays he organised quartet performances at his place. Beethoven then had the opportunity to have his string quartets practised and played. In matters of everyday life Zmeskall also helped Beethoven, for example finding a suitable assistant, providing the composer with pens and lending him small amounts of money. Around 1820 Zmeskall became bedridden and could not see Beethoven any more. However, he was present during the first performance of the composer's Ninth Symphony on May 7th, 1824. In 1816 Beethoven dedicated his string quartet in F minor, op. 95 to his friend.(S.B.)