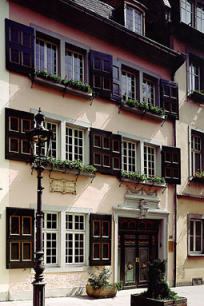 The Beethoven-Haus, a landmark of Bonn, is supported by the Beethoven House Trust (founded in 1889) and encompasses a Museum, the Beethoven Archives and the Chamber Music Hall. The Museum displays a representative selection from the trust's collections, the largest privately-owned Beethoven collection in the world. Portraits, original manuscripts, instruments and everyday objects convey a lively and authentic glimpse into the life and work of the composer. The Beethoven Archives founded on the 100th anniversary of Beethoven's death in 1927 as a scientific research institute, are the central repository of documents relating to Beethoven's life, work and intellectual circle and own also a special library. The Chamber Music Hall, inaugurated in 1989, not only has outstanding acoustics, but is also considered to be a particularly beautiful modern concert hall. Alongside the special emphasis on the music of Beethoven and his contemporaries, music of modern times is also performed and promoted here.

In the years to come it is planned to open the Beethoven Haus round the clock to the world’s public: In the virtual ‘Digital Beethovenhaus’, Internet users will find everything about the composer, his work, his life and his time. To the sound of Beethoven’s music, they will be able scroll original editions and manuscripts which are exhibited nowhere else.