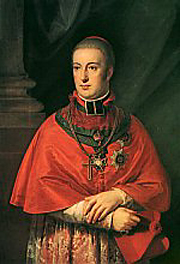 Beethoven's fifth piano concert was composed in 1809 - a tough year as Europe was in the middle of the Napoleonic Wars. In April, Austria had declared war on France. In mid-May of 1809 Vienna was bombarded and occupied by French troops under Napoleon. The Imperial Family, among them Archduke Rudolph, Beethoven's friend, patron and student, fled from Vienna to the Hungarian regions of their empire on May 4th.

Living conditions soon worsened under French occupation. The citizens had to provide the troops with food which aggravated the situation dramatically. In addition, Austria was forced to make reparation payments and pay compulsory loans as well as special taxes. Thus, Beethoven was affected, too. On September 19th, 1809 he wrote in a letter to Leipzig mentioning the plight and distress because twice the usual amount of food and other supplies was needed due to the damn war. On January 2nd, 1810, he mentioned the memories of the first French occupation from 1805 which resulted in the first performance of his opera "Leonore" being a failure. From 1809 on, Beethoven rejected Napoleon and became more focused on his German nationality as it was customary for that time. His fifth piano concert gives clear evidence of this development:

Several drafts for the fifth piano concert are similar to drafts concerning Heinrich Joseph von Collin's national poem "Osterreich uber alles" (Austria above all). (See draft sheet HCB Mh 79). Collin's poems were quite popular and were often set to music. For his national texts, the poet was wanted by the French. Beethoven never completed the musical version for the Austrian national poem.

Archduke Rudolph and the Imperial Family returned no earlier than January 30th, 1810, from their Hungarian exile to Vienna. Beethoven had used his gifted student's absence to complete the piano concert. When the Archduke returned, Beethoven was very glad. Apart from the piano sonata "Les Adieux" op. 81a Rudolph also received the fifth piano concert - a dedication which is quite understandable under the circumstances given.

As is true of many of the composer's works with nicknames—e.g. the "Moonlight" Sonata, the "Spring" Sonata—the "Emperor" moniker attached to Beethoven's Piano Concerto No. 5 in E flat major, Op. 73 (1809) is not the composer's own. Still, there is hardly an adjective that could more aptly evoke the work's impressive scale and majesty. Despite its considerable technical demands, the "Emperor" Concerto handily transcends the typical role of the concerto as a mere virtuoso vehicle. Indeed, it is virtually symphonic in conception; its E flat major key (the same as that of the "Eroica" Symphony), expansive form, and sometimes martial, always grand, character grant the concerto a place among the defining works in the composer's heroic vein. The first performance of the Concerto was likely that given by Friedrich Schneider in Leipzig on November 28, 1811.

The Concerto No. 5 is Beethoven's final essay in the concerto genre. He may have lost interest in concertante works at least in part because of his advancing deafness, which brought an end to his own career as a pianist. Tellingly, he himself never publicly played the Concerto No. 5, though he had written his four previous piano concerti for his own use on the concert stage. Moreover, the athletic, virtuoso ideal rarely fit the language of Beethoven's late works, even though some of the last piano sonatas are punishingly difficult.

In the Piano Concerto No. 4, Beethoven made a striking break with convention in commencing the work with a piano solo. In the opening Allegro of No. 5, he takes this idea to an extreme, providing the soloist with an extended cadenza, punctuated by tutti chords from the orchestra, that outlines in miniature the entire 20-minute movement. The main theme is marchlike and assertive; the somewhat more relaxed second theme first appears cloaked in mystery, in a minor-key version that soon gives way to the expected statement in the dominant major. The grandeur of the movement is colored by excursions to remote keys that, however, never fully thwart the powerful forward drive.

The lyrical and idyllic second movement, Adagio un poco moto, is one of Beethoven's most tender and intimate statements. The piano predominates here—not in a virtuoso context, but in a manner and texture that prefigure the nocturnes of Chopin. A long dominant pedal underpins a muted, even ethereal transition to the Rondo. In contrast to the noble magnificence of the opening Allegro, the Rondo is a movement of jubilant affirmation, evidenced at once by the upward-surging, dance-like main theme. Though the ambitious conception of the Concerto remains ever at the fore in the Rondo, Beethoven nevertheless does not shy away from providing the soloist with passages of exceptional brilliance.