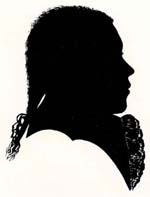 The silhouette created by Joseph Neesen is the first illustration of Ludwig van Beethoven which has been handed down. According to Beethoven's school day friend Franz Gerhard Wegeler, it was created in 1786, when the composer was 16 years old. It is said to have been created in the house of the prestigious von Breuning family in Bonn, in one of two evenings during which silhouettes of each family member were created.

The depiction shows Beethoven at the time when he was organist at the court of the Archbishop of Cologne. The young musician, accordingly, wears the wig and the lace trimmed neckerchief, which - together with a green "Frackrock" (tail coat), a buckled short, a silken waistcoat, and an epee - belonged to the mandatory court costume that had to be worn at official events.

Most probably the original silhouette was not a scissor-type silhouette, but an ink drawing. In the course of the time it got lost, but a lithograph of the depiction had been preserved, which, in 1838, was published as frontispiece of Ferdinand Ries and Franz Gerhard Wegeler's book "Biographische Notizen über Ludwig van Beethoven"1. Сохранилась также репродукция этой литографии, сделанная братьями Беккер.2 ("Beethoven Remembered").